H.E. Demeke Mekonnen, Deputy Prime Minister and Foreign Minister of Ethiopia, and H.E. State Minister Ambassador Redwan Hussein gave a briefing to ambassadors and representatives of international organizations on the rationale of declaring a unilateral humanitarian ceasefire in Tigray.

In his speech, the Deputy Prime Minister and Foreign Minister highlighted the various challenges that threatened to stall the multifaceted reform process in the country, including the unruly behavior of the TPLF which was culminated in its defeat.

He also said the Government of Ethiopia tackled all the challenges in the electoral process and managed to have a peaceful and credible election under the auspices of the Independent Electoral Board.

Speaking about the recently declared unilateral humanitarian ceasefire, Mr. Demeke said it was a bold and magnanimous decision that would benefit the people of Tigray.

The Deputy Prime Minister said, although the government’s declaration for the unilateral humanitarian ceasefire in Tigray took many by surprise, the decision was not taken abruptly.

He said the current government of Ethiopia if elected, was contemplating the importance of declaring a ceasefire and holding an inclusive dialogue with relevant stakeholders after the election, including innocent members of the TPLF.
In this regard, he said the international community should push with a concerted effort for the realization of the humanitarian ceasefire and urge the other side to abide by it.

The Government of Ethiopia expects the international community to understand the context that the ceasefire has been made and act neutrally to address problems that might further be exacerbated by provocative statements.

The international community should understand that the Government of Ethiopia has invested a lot in rebuilding destroyed infrastructure and restoring basic services in the region, despite the criminals took the lives of many people who were involved in such restoration and rehabilitation works.

In this regard, unless the terrorist element in the region is forced to accept the ceasefire, the government of Ethiopia cannot afford to lose more lives and guarantee the protection of the lives of service givers and humanitarian operators.

What the government guarantee at this time is to make sure that all of the humanitarian supports are safely delivered to humanitarian actors to the borders of the Tigray region.

Although a ceasefire has been declared, the government is still committed to supporting the UN-EHRC joint investigations on the alleged atrocities committed in the region, in addition to reiterating its call to the African Commission on Human and Peoples’ Rights to resume the joint investigation with the Federal Government of Ethiopia.

The Deputy Prime Minister also expressed his profound appreciation for humanitarian operators who have been supplying all the necessary support to those in need in the Tigray region and pledged to work closely with them in their noble mission.
Ambassador Redwan, on his part, listed out the main reasons that the government of Ethiopia decided to evacuate its troops from Tigray and declare the unilateral humanitarian ceasefire.

According to Ambassador Redwan, the Government of Ethiopia has decided to withdraw its soldiers from Tigray assessing that most of the political and military leaders of the TPLF have been either killed or imprisoned.

As neutralizing or apprehending the criminals was one of the objectives of launching the law enforcement operation in the region, he said protracting the conflict just to upend the remaining few TPLF leaders is not feasible.

A few months into the law enforcement operation, many people, including children, have been used as human shields to cover the TPLF leaders, which made it dangerous to make a surgical operation in neutralizing the wanted criminals and the Ethiopian government had to call on the ceasefire to save innocents.

Given the irresponsible nature of the terrorist group, he said, the federal government should also show magnanimity and declare the ceasefire, understanding that the people in the region should use the farming season undisturbed.

Although the frequent calls of humanitarian operators for unfettered access in the region were caused by the atrocious acts of the criminal group, the government has to declare the unilateral humanitarian ceasefire to give chances for humanitarian actors to save more lives, he added.

According to Ambassador Redwan, the government also needed to declare the ceasefire, understanding that the first receivers of the brunt of the conflict are the people of Tigray who deserve peace and seek a peaceful solution to the problem.

Before the TPLF attacked the Northern Command of ENDF, they were funding and masterminding conflicts in many parts of Ethiopia, which caused untold suffering on the people of Ethiopia, he said.
We want the international community to know that we are dealing with a rogue element who, despite the ceasefire, publicly vowed to attack the Amhara region and pursue Eritrean forces crossing the borders, he said, although the group continued to lament that the Eritrean troops didn’t leave the Region.

According to our sources, after the withdrawal of our forces, he said, the TPLF has made ethnically motivated killings that took the lives of 70 people in Mekelle, most of whom were working under the interim administration of Tigray.

Although the media have been caught up with the destruction of a bridge over Tekeze River, pointing fingers on the government as usual, he said the fact is that there were two more bridges destroyed by the group.

We cannot force organizations to continue giving their services, such as flights, banking, and telecommunication if we fail to guarantee the protection of their lives. The other party has to stop belligerence for that to happen.

According to data found from the Ministry of Agriculture of Ethiopia, 400,000 quintals of seeds and fertilizers had been stored in Mekelle, well beyond the needs of the farmers in the Tigray region, he said.

In finalizing his briefing, Ambassador Redwan reiterated the federal government’s commitment to work closely with the humanitarian operators, addressing their quest for access to communication equipment, visa and others through proper channels of the government which has already been set up.

The ambassadors, the diplomatic community, and representatives of international agencies have participated in a question and answer session raising some of their concerns and also appreciating the government of Ethiopia for declaring the humanitarian ceasefire and conducting peaceful and credible elections. 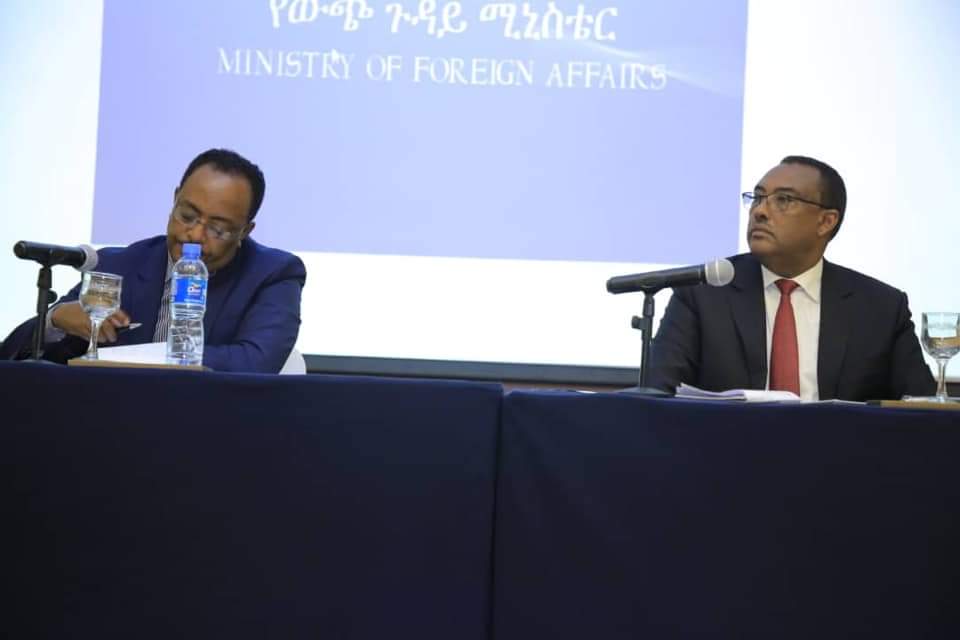