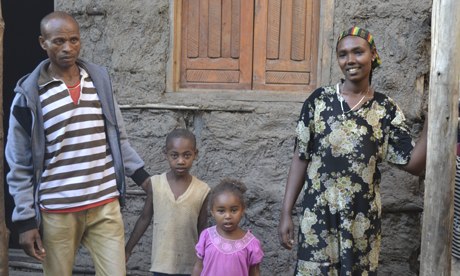 Wudinesh Demisse raises her hand above her head, showing off the matchstick-sized birth-control implant embedded just beneath the skin of her upper arm.

Wudinesh, 28, is a farmer in rural West Arsi, in Ethiopia‘s central Oromia region. With three children already, Wudinesh says it is time to stop. “For me, three is enough,” she says, through a translator. “If they are too many, they are too expensive.”

Wudinesh, who lives in a small village 200km south of the capital, Addis Ababa, is one of millions of Ethiopian women who have gained access to modern forms of birth control over the past decade. Today, her local health post stocks a range of products, from condoms and pills to longer-acting injections and implants.

Ethiopia is increasingly touted as a family planning success story. The government, which has made maternal and child health national priorities, is proud of its statistics – the country’s contraceptive prevalence rate, for example, jumped from 15% in 2005 to 29% in 2011 – and says efforts to reach remote, rural areas lie at the heart of its success.

Along with trained, salaried health extension workers – all of whom are female, a step to make families more comfortable with door-to-door visits – thousands of volunteers have been enlisted nationwide in the government’s “health development army”.

At the centre of this are people like Wudinesh and her husband, who head one of the government’s celebrated “model families” and are foot soldiers in a massive social engineering project to redefine healthy behaviour.

“They are role models and change agents for social transformation in each village across the country,” says Kesetebirhan Admasu, Ethiopia’s health minister, who explains that the project is based on a theory of how innovations spread that assumes change happens step by step. The idea is that there are “trendsetters” in every community, and that others can be persuaded to admire and, eventually, copy their behaviour.

To become a model family, a household has to adopt most if not all of the government’s 16 priority interventions – from vaccinating their children and sleeping under mosquito bed nets to building separate latrines and using family planning.

Model families get certificates, are celebrated at village ceremonies and are asked to support five other households in adopting the priority interventions.

Ethiopia, Africa‘s second most populous country, is overwhelmingly rural and this has hampered the expansion of formal healthcare services and infrastructure. Estimates from 2009 suggest there was only one doctor for every 50,000 people. The government’s health extension programme is a strategy to bridge the gap and build capacity while expanding the services.

The NGO Marie Stopes International has urged rich countries to adopt some of Ethiopia’s techniques, saying they could save millions of dollars if they too trained up frontline health workers, nurses and midwives to carry out tasks – such as the fitting of implants – otherwise done by doctors.

For Kesetebirhan, the biggest successes have come from targeting “cultural and attitude-related bottlenecks”, which limit rural women from taking up services even when they are available.

In one region, Kesetebirhan says the health development army helped the government understand why women were not giving birth in health facilities. The army discovered women were fearful of the traditional stretchers used to carry them to hospital (which had become associated with bad luck) and did not want to go without the traditional coffee and religious ceremonies they could get at home. This led to changes including a newly-designed stretcher and plans to bring coffee beans, traditional food, and religious leaders to health facilities.

“All these innovations and interventions, they seem to be simple but it is changing the way services are perceived,” Kesetebirhan says. In the case of family planning, he says products like implants were not popular before but are now being used by a significant number of rural women. “It’s all because of the information that they get from their neighbours, from their friends and so on,” he says. “That is how they break all those cultural norms.”

Many African countries have set up extensive community health worker schemes to reach rural areas. Understanding why people behave the way they do, and structuring projects accordingly, is also an increasingly popular approach in development, and a response to the failures of many expert-led schemes. The World Bank, for example, is working on a major report on the behavioural and social foundations of economic development, expected this year.

The military metaphors in Ethiopia’s programme set it apart from many others, however. “Such a movement would not be successful without the discipline of the army,” insists Kesetebirhan. “We said this is the way we really want to mobilise the community – they participate in the meetings, they work with the discipline of an army, and they address the critical bottlenecks.”

Kesetebirhan says it is the government’s policy to ensure women are not coerced into taking up health interventions. But some are suspicious of the development army model, which is also being pursued in agriculture with a nationwide network of “model farmers”…