H.E. Ambassador Hirut Zemene delivered a public lecture on Ethiopia’s Foreign Policy at the CERIS-ULB Diplomatic School of Brussels, today the 28th of May 2021.

The lecture was opened with an introductory remark by H.E. Ambassador Jan de Bock, President of the CERIS-ULB diplomatic School.
In his remarks Ambassador De Bock praised Ethiopia’s crucial role in the Horn of Africa and the entire continent.

In her lecture, Ambassador Hirut extensively discussed Ethiopia’s long history of foreign relations and diplomacy practice, its long-standing values of giving prime attention to African causes as well as its faith in multilateralism and collective security.

Furthermore, Ambassador addressed the audience regarding the current situation in Ethiopia and the Government’s undertakings to solve the challenge that the country faces.

The public lecture was attended by Academic heads of the University, Professors as well as students of the Diplomatic School. 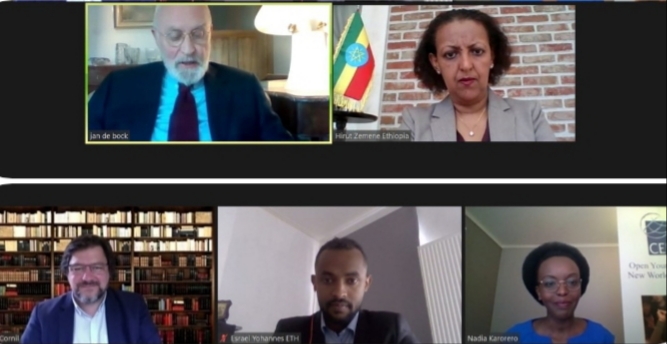