Skip to content
The TPLF launched an offensive on the morning of August 24, 2022, reigniting the conflict and flagrantly violating the humanitarian truce.
The TPLF falsely alleged that the Government of Ethiopia had commenced another “full-fledged war”. TPLF’s propaganda machinery is at the same time spreading this falsehood, betraying a well-orchestrated effort.
The TPLF forcefully conscripted and trained youth from the region, mobilized the population through coercion and propaganda, and launched the offensive as expected.
The Government of Ethiopia has demonstrated its commitment to resolving the conflict in Tigray through peaceful means over the past several months. The Government has taken a number of confidence-building measures to resolve the conflict in the Tigray region, including declaring a unilateral indefinite humanitarian truce on March 24, 2022. It has been expediting unfettered humanitarian access to the Tigray region. The Government has also been increasing transportation and distribution of fuel and cash.
In addition to facilitating the smooth delivery of humanitarian assistance to our people in need in the region, the Government of Ethiopia signed a Third-Party Implementation Agreement with the United Nations Office for Project Services (UNOPS) to implement the World Bank-financed Recovery Project in the Tigray region on July 11, 2022. These are well-known facts.
Furthermore, on July 12, 2022, the Government appointed a High-level Peace Committee to lead peace negotiations with the TPLF. This appointment of a Peace Committee shows the Government’s commitment and good faith to pursue constructive engagement and approaches to the peace talks.
The TPLF, however, true to its character, repeatedly downplayed the peace efforts and, in fact, failed to reciprocate the confidence-building measures taken by the Federal Government of Ethiopia. The TPLF’s belligerent rhetoric has recently been intensified after the Peace Committee’s announcement, on August 17, 2022, of additional steps towards peace, including the readiness to sign a permanent ceasefire and agree on arrangements for the restoration of services that would have paved the way for the commencement of political settlement.
However, on the very same day of the announcement of these additional steps in the peace plan by the High-Level Peace Committee, the TPLF falsely alleged that it had been attacked and that the unilateral humanitarian truce could be considered non-existent. Its propaganda machine has also been intensively engaged in undermining the peace efforts as well as denigrating and attacking the African Union.
This pattern of negative campaigning shows clearly the TPLF’s longstanding tactics of victimhood and attempts to shift blame. The TPLF’s entrenched violent nature and its recent behavior explain why it would not be ready for peace. The TPLF’s broad daylight theft of fuel destined for humanitarian aid shows its complete disregard for the welfare of people in the region and humanitarian principles. The Government of Ethiopia will continue working with humanitarian actors to reduce the unnecessary suffering that is being caused by the TPLF’s callous behavior.
The Government of Ethiopia reiterates its commitment to resolving peacefully the conflict in the Tigray region. The TPLF violated the humanitarian truce and launched the offensive. It must bear full responsibility for this blatant action and its consequences. The International Community must unequivocally condemn the TPLF’s belligerent actions, its refusal to end the conflict through peaceful means, and hold it responsible for the suffering it is causing to the people in the region. Calling on both sides to end the conflict denies the reality and will further embolden the TPLF.
The Government will continue with its efforts to find a lasting solution to the various social and political challenges facing the country through the inclusive National Dialogue. 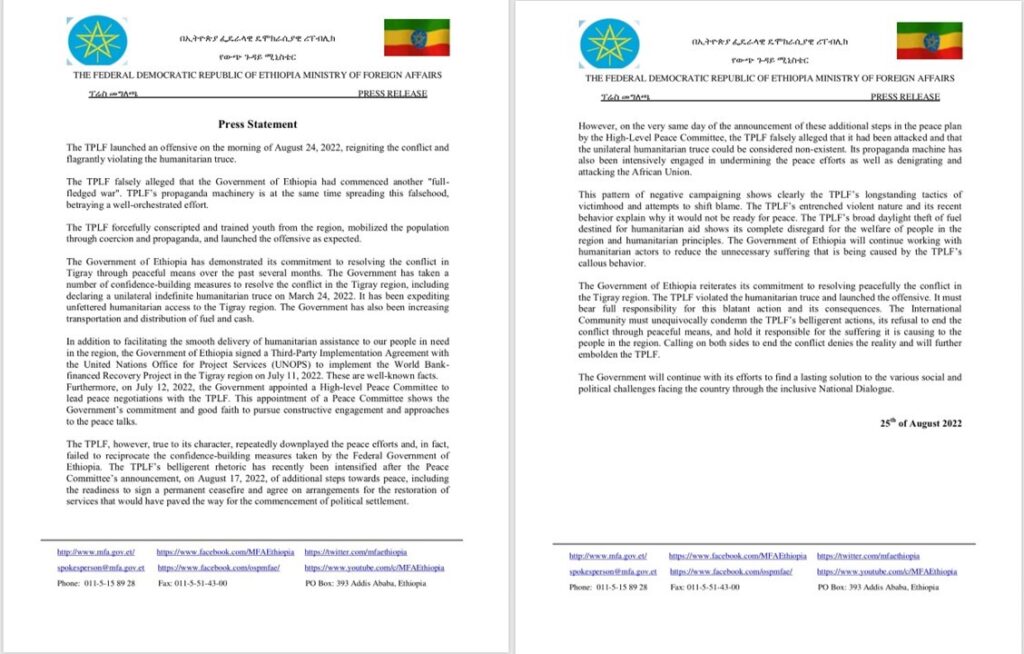