The spokesperson of Foreign Affairs of Ethiopia, H.E. Ambassador Dina Mufti, gave the Ministry’s biweekly press briefing on 15 April 2021, to the media. In his presentation, the Ambassador focused on political diplomacy (with a focus on situations regarding humanitarian support and alleged atrocities on rights violations in Tigray and the GERD negotiations), the Ethiopia-Sudan border dispute, economic diplomacy, capacity building and citizen-centered diplomatic activities. Below is Summary of the Press Briefing

• Highlighted issues at the Kinshasa meeting and Ethiopia`s perspectives on the matter.
• Said the AU led trilateral negotiation is the only viable way to reach a win-win outcome.
• Cooperation and the spirit of African brotherhood are the best option for the management and utilization of the waters of the Nile.
• said attempts of Egypt and the Sudan who claim the GERD as a threat to Arab water security (despite being in Africa like every other riparian country and unnecessarily politicizing the matter) is disappointing
• Said In line with the Communiqué issued at the conclusion of the meeting of the African Union Bureau of the Assembly in July 2020, the most practical and workable way for a successful negotiation is first to agree on the first filling and related operations and then to proceed to a comprehensive agreement on the utilization of the waters of the Nile.
• underlined that Ethiopia, in good faith has invited Sudan and Egypt to assign operators for data exchange

• Regarding the border dispute, they said Ethiopia is committed to resolve the matter through a peaceful means based on the bilateral agreements and existing boundary mechanisms.

• The Ambassadors on their part expressed their profound thanks for the briefing and emphasized the importance of reaching a win-win outcome on the GERD through the AU led negotiation based on the principle of “African solutions to Africa`s problems.” They further appreciated Ethiopia`s determination to resolve the Ethiopia-Sudan boundary issue peacefully.

H.E. Demeke Mekonnen, Deputy Prime Minister and Minister for Foreign Affairs of Ethiopia held talks on Friday (April 09) with Mr. Pekka Haavisto, Special Envoy of the European Union and Minister of Foreign Affairs of Finland. Their meeting had covered the situation in Tigray, GERD, and Ethiopia-Sudan border dispute. Regarding the situation in Tigray the following points were raised:

• the government is committed to bring perpetrators to justice based on the findings of the joint investigation of the Ethiopian Human Rights Commission and the UN
• the international community should support the government that still is covering 70 percent of the delivery reaching 4.5 million people so far.
• a roadmap has been charted out by the government to resettle internally displaced people before the upcoming rainy season.
• Life in the region has returned to normalcy and the government is initiating plans to have a wide-range consultation with the community to make the peace process sustainable while outlaws would have no option but to face justice.
• Mr. Haavisto said during his visit to the region the humanitarian agencies and the media operating there have told him that access to the region has been very much improved.
Regrading the Grand Renaissance Dam:
• Mr. Demeke reiterated Ethiopia’s commitment to the AU-led process and appreciation to the new Chairperson’s initiatives.
• The special envoy expressed his view that expediting information and data exchange before the commencement of the filling of the dam would be advisable.

Speaking about the Ethiopia-Sudan border conflict Mr. Demeke said it is regrettable that the international community did not openly criticize Sudan for occupying Ethiopia’s territories through the use of force.

H.E. Demeke Mekonnen, Deputy Prime Minister and Foreign Minister of Ethiopia received at his office on Friday (April 9) the newly elected Deputy Chairperson of the African Union Commission, Dr. Monique Nsanzabaganwa. They discussed current situations in Tigray, Ethiopia’s commitment to the AU-led process over the GERD negotiations and the need to cooperate over COVID 19 vaccination issues.

Deputy Prime Minister and Foreign Minister H.E. Demeke Mekonnen had received yesterday WHO Regional Director for Africa Dr. Matshidiso Rebecca Moeti. Mr. Demeke said Ethiopia is keen to work with WHO to add up on the achievements registered in expanding Primary Health Care in the previous decades and cooperate on initiatives supporting affordable vaccine to COVID-19.

H.E. Demeke Mekonnen, Deputy Prime Minister and Minister for Foreign Affairs of Ethiopia has held a phone conversation on Thursday (April 08) with Denmark’s Minister of Foreign Affairs, H.E. Jeppe Kofod. They talked about GERD, Ethiopia’s commitment in bringing alleged human rights violation in Tigray based on the results of the joint Ethiopia-UN investigation, the Ethiopia-Sudan border issue and the upcoming election. On the election, Mr. Demeke said preparations are well underway to make it fair and free augmented by the efforts of the newly restructured and independent institution- the National Electoral Board of Ethiopia- (NEBE).

H.E. Demeke Mekonnen, Deputy Prime Minister and Minister for Foreign Affairs of Ethiopia had a telephone conversation with National Security Advisor to President Biden, Jake Sullivan. Mr. Demeke said the situation in Tigray is improving, though demanding serious intervention and discussed issues over the #GERD where he underlined that the AU-Led negotiation is instrumental to solve outstanding issues. Mr. Demeke also talked about the border issue with Sudan and said it would be solved peacefully.”

State Minister H.E. Ambassador Birtukan Ayano had attended the 27th anniversary commemoration of the Rwandan genocide against the Tutsis. She said the genocide in Rwanda was the result of divisive policies and hate speech and recalled that Ethiopia has played a leading role in sending peacekeepers, protecting the vulnerable and rehabilitating the country.

Although Sudan is the current Chair of IGAD, it is regrettable to see it as the main actor in jeopardizing the peace & security of the Horn of Africa by invading Ethiopian territories, plundering and displacing civilians and beating war drums to occupy even more lands.

Ethiopia urges the international community to put pressure on Sudan to come to its senses and evacuate its troops from Ethiopian territories that it has forcefully occupied since 6 Nov. 2020 while the Ethiopian army was preoccupied with the law & order operation in Tigray.

Ethiopia is ready to solve its border dispute with Sudan using existing conflict resolution mechanisms once the status quo is maintained as per the 1972 Exchange of Notes b/n the two that prohibits displacement & force to solve border issues till amicable solution is found.

State Minister H.E. Tsion Teklu, has received a delegation of Romanian investors led by the Honorary Consul of Ethiopia in Romania. The State Minister highlighted investment opportunities and called on them to invest, especially in the agricultural sector.

Ethiopian Consulate General in Chongqing, China took part in the Chongqing Urban Tourism Festival and Intercity Tourism Trade Fair. Ethiopia’s coffee accompanied with the special ceremony was on display. Unique tourist destinations of Ethiopia were promoted during the ceremony as well.

The Consulate General Federal Democratic Republic of Ethiopia in Los Angeles in collaboration with the Ministry of Foreign Affairs of the Federal Democratic Republic of Ethiopia and other stakeholders hosted a virtual Trade and Tourism Promotion Forum on Thursday to strengthen tourism and business ties between Ethiopia and the United States of America. This virtual promotion made a successful deliberation on Trade and Tourism opportunities available in Ethiopia.
In the virtual promotion forum, more than 102 Trade & Tourism representatives, representatives of various chambers of commerce and government representatives and different organizations are represented and attended both from Ethiopia and the United States of America.

The Embassy of the Federal Democratic Republic of Ethiopia in Abu Dhabi in collaboration with the Abu Dhabi Chamber of Commerce and Industry had held a virtual business forum on March 31, 2021, under the theme; “Introducing the Investment Opportunities and Trade Potentials of Ethiopia” in Abu Dhabi. The main objective of the event was to introduce the immense investment opportunities in Ethiopia and the vast trade potential that Ethiopia has to offer to the Abu Dhabi business community. More than 100 private companies of Abu Dhabi and higher government officials from Ethiopia took part in the event.

Ethiopians and people of Ethiopian descent in Europe, the Americas and the Middle East have continued to support the Grand Ethiopian Renaissance Dam.

UAE’s “Anwar Gargash Diplomatic Academy” in collaboration with the Ethiopian Foreign Service Training Institute and Ethiopia’s embassy in UAE/ Abhu dabi has given a three day training for Director Generals at the headquarter via zoom on various topics, such as Combating violence and extremism, intercultural awareness, international cooperation, cultural diplomacy, and youth empowerment. The training has ended on 15 April 2021. 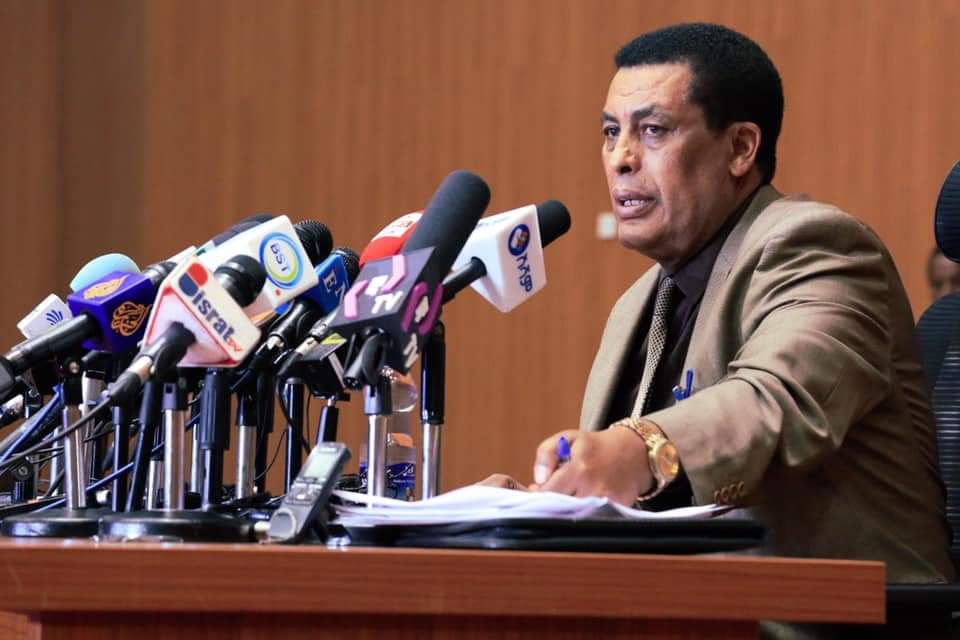 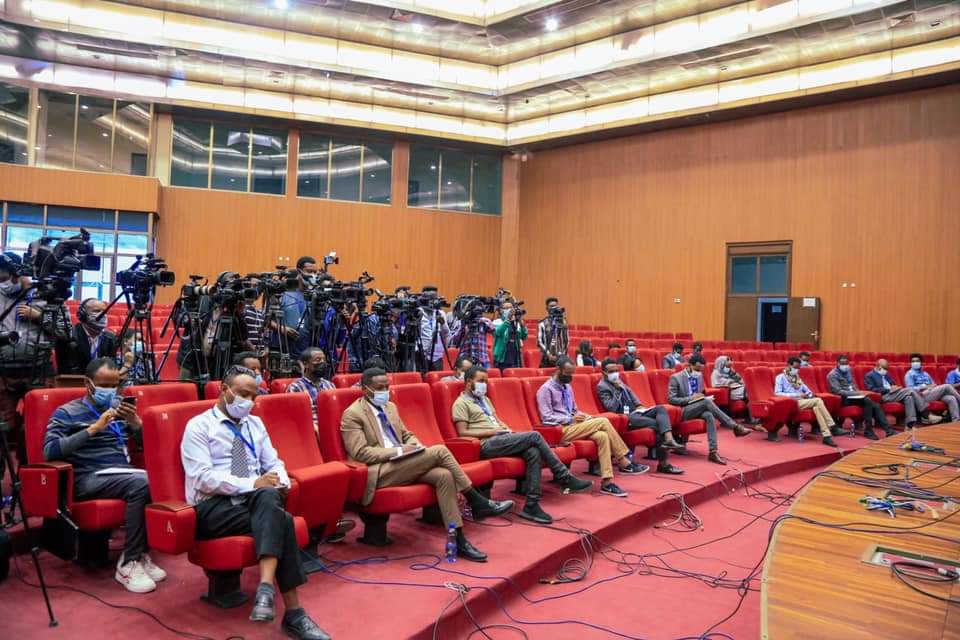