The spokesperson of The Ministry of Foreign Affairs of Ethiopia, H.E. Ambassador Dina Mufti, gave the Ministry’s biweekly press briefing today (05 January 2020) to the media. In his presentation, the Ambassador focused on activities related to the law enforcement operation in Tigray, the current Ethiopia-Sudan Border dispute, the Grand Ethiopian Renaissance Dam (GERD), and citizen-centered diplomatic activities within the past two weeks. Please find the summary here:

I. DEVELOPMENTS IN TIGRAY

1. Briefings to Ambassadors and HRDG representatives

Deputy Prime Minister and Foreign Minister, H.E. Mr.DemekeMekonnen, together with senior government officials, discussed yesterday with Ambassadors and representatives of members of Human and Resilience Donor Group (HRDG) on the current humanitarian situation in Tigray.

• Mr.Demeke appreciated member countries of the Group for their support and briefed the Ambassadors on the ongoing humanitarian activities in the Tigray region and the results achieved thus far.
• The Deputy Prime Minister said food items, commodities, and medical supplies are being provided in the region to address the needs of the beneficiaries.
• As agreed between the Government of Ethiopia and the UN Resident Coordinator, and using the existing coordination mechanism, the provision of humanitarian assistance is going as planned said the Deputy Prime Minister.
• Recalling the colossal destruction caused on infrastructure by the TPLF junta, Mr.Demeke briefed the Ambassadors on the daunting task of reconstruction that is now underway with telecommunication lines being restored in almost all parts of the region and financial institutions resumed their operations.
• Relevant government institutions are working closely with donor communities and will continue to do so to effectively and timely address issues of refugees and those who need humanitarian assistance.
• The interim administration is also working tirelessly in making sure that different levels of the administration of the region provide the necessary services including engaging the community to effectively respond to the development needs of the people in the region.
• Ministers and other officials of the Ethiopian government present at the meeting also provided detailed information on the work that is underway to address the humanitarian situation in Tigray.
• An understanding was reached to continue the engagement with the Group to work together to further scale-up humanitarian activities in the region.
• The Ambassadors appreciated the government of Ethiopia for taking the initiative to brief them on current issues in detail.

• The process of disarming illegally armed militia and Special Forces is progressing well. Many militia members have been disarmed and Special Forces of Tigray have returned their arms peacefully. Peace is returning to the region gradually.

• The interim administration is working hand in hand with the command post to restore peace, stability, and security in the region.

• The interim administration has reorganized the regional cabinet. Qualified candidates have been appointed.

• Telecom, electricity and bank services, and other infrastructural services have started to be given in some zones. Some of the Zones, including southern zones, eastern zones-Adigrat, and Abiadi- are getting power supplies. In the coming few days with the resumption of telecommunication services, full banking services will be acquired.

• Public support for the interim administration has been good. The interim government has been engaged in dialogue with the public and in all of the discussions, the public strongly condemned the TPLF for attacking the National Defense Forces. They have ensured that they will stand with the new administration.

• Government support to the interim administration-in terms of humanitarian assistance, rehabilitation, and budget allocation-has been very impressive. Some people are at risk in terms of food supply and relief and emergency activities are going on in the region. The only thing is to speed up and strengthen the distribution to all woredas and cities until all needy people are addressed in the region.

II. RECENT MILITARY DEVELOPMENTS IN THE BORDER AREAS WITH SUDAN

1. THE REALITY ON THE BORDER ISSUE

• Ethiopia has always been by the side of Sudan and its people whenever they face some natural and manmade problems. What has happened in our common border recently did not commensurate with the longstanding principle of solidarity and fraternity that existed between the two countries.

• Starting from November 9, 2020, Ethiopia has observed that the Sudanese Military Forces have launched organized attacks by using heavy machine guns and armored convoy on the border areas.

• Agricultural products of Ethiopian farmers are looted, their camps are vandalized, and they are also hampered from harvesting their farms. Many civilians have been murdered and wounded.

2. ONGOING EFFORTS IN SOLVING THE BORDER ISSUE AND THE WAY FORWARD

• The Ethiopia-Sudan High-Level Political Committee recently has discussed the issue in Khartoum. The meeting is the second of its kind and it will continue in Addis Ababa.

• Ethiopia wants to redouble its efforts to translate the strong bilateral relation with Sudan into more strategic cooperation (Minister for Transport has visited Sudan to discuss with her Sudanese counterpart the cooperation projects on port utilization and railway development).

• Ethiopia believes that agricultural activities can be successful if only peace prevails in the area and mutual destabilization would help neither of the two sides. Thus, the issue should only be solved through dialogue.

• Ethiopia and Sudan accepted the draft document of the AU on the continuation of the trilateral negotiation, a defined role of the AU experts.

• There is an agreement on most of the issues of the filling and operation of the dam but there are differences in the future water development projects on the Abbay Basin.

• The trilateral meetings was scheduled to continue at the expert’s level with oversight of ministers of water affairs, to take stock of agreed and outstanding issues to be presented to the six ministers meeting that is expected to be held on Sunday the 10th of January 2021. But the program on Monday was cancelled because of the absence of Sudan.

The Ministry of Foreign Affairs of Ethiopia launches a two-month-long social media campaign on Saturday, trending under the phrase #RisingEthiopia and targeting all Ethiopians and those of Ethiopian origin.

The campaign aims to promote the good qualities of Ethiopia and assuage the effects of the misguided media narrative that dominated the air for the last couple of months.

Besides mobilizing Ethiopians living abroad for a common good, the campaign will also introduce Ethiopian investment potential to the international community and build up Ethiopia as an emerging tourism destination. 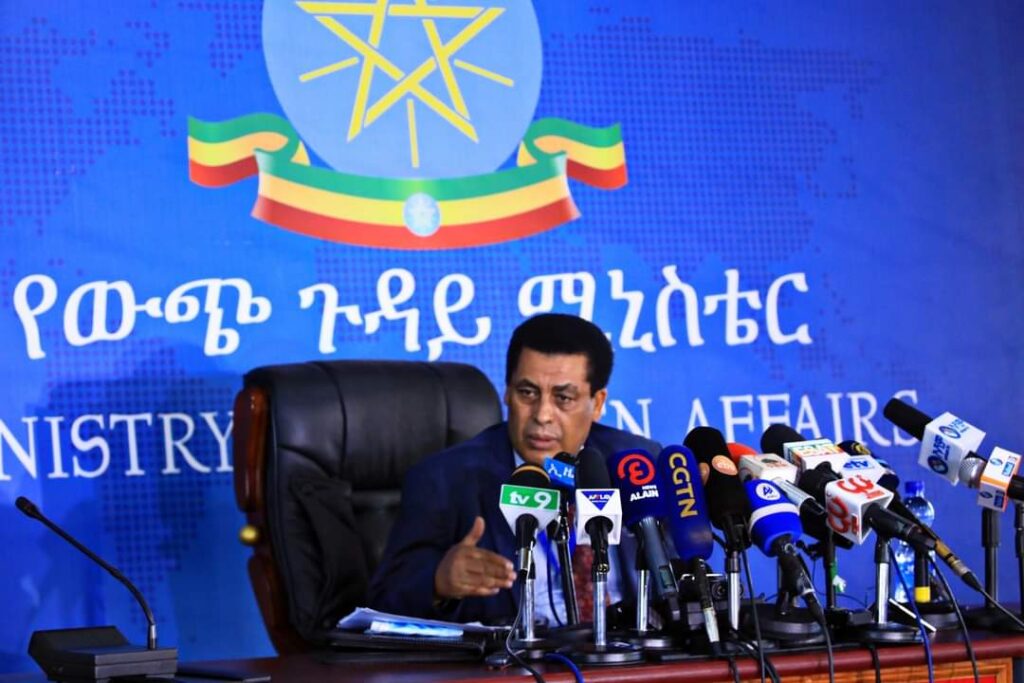 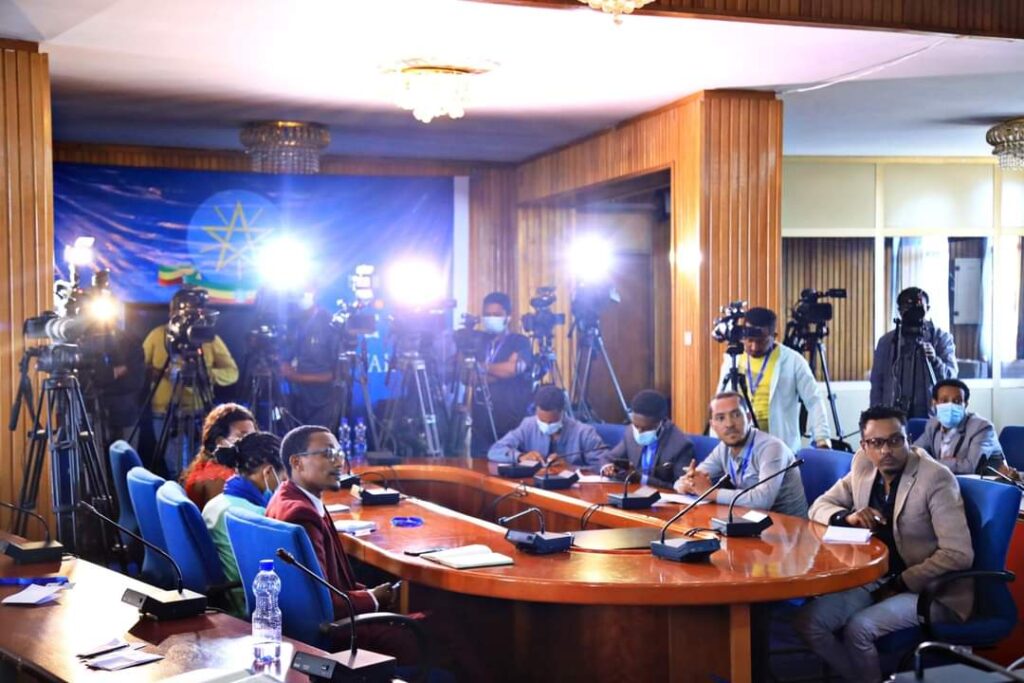