The Spokesperson of The Ministry of Foreign Affairs of Ethiopia, H.E. Ambassador Dina Mufti, has presented the Ministry’s biweekly press briefing today (March 09) focusing on political diplomacy, the GERD issue, and major activities related to Economic Diplomacy and citizen-centered diplomacy.

• H.E. President Sahle-Work Zewde on Friday (March 05) received the credentials of the Ambassadors of the U.S.A., Kenya, Switzerland, Chad, and Gambia. They had discussions over bilateral, regional issues. They noted the importance of solving African solutions to African problems. The President has also briefed the Ambassador on current situations in the Tigray region.

• Deputy Prime Minister and Foreign Minister H.E. Demeke Mekonnen had briefed Ambassadors and representatives of members of the United Nations Security Council in Addis Ababa on the current situation in Tigray. According to Mr.Demeke:
– Unfettered humanitarian access, including to international media has been granted in Tigray
– Joint investigation on human rights violations is underway.
-3.5 million beneficiaries of the humanitarian assistance have now been reached through a cluster-based approach,
– Infrastructures that were destroyed by the TPLF forces are now being rebuilt and have resumed services.
– he also addressed concerns with regards to the challenges that some journalists and translators faced, coordination in terms of delivering humanitarian aid to some places, and the presence of foreign troops in the region.
• Deputy Prime Minister and Foreign Minister, H.E. Demeke Mekonnen had a phone conversation yesterday with Canada’s Minister of Foreign Affairs, H.E. Marc Garneau on issues of mutual concern, particularly the situation in Tigray with regard to humanitarian support activities and human rights concerns, and the upcoming general election in Ethiopia. Mr. Demeke told the Canadian minister that despite the unimpeded access to humanitarians, support from the international community does not exceed the government’s enormous contribution in delivering food and non-food items.

• Deputy Prime Minister and Foreign Minister, H.E. Demeke Mekonnen welcomed at his office today (March 08), US Ambassador to Ethiopia, H.E. Geeta Pasi. Noting the multifaceted relationship between the two countries, particularly in education, health, and security issues, they underscored the need to scale it up with expanded engagements. Mr.Demeke expressed his hope that the unhindered access to humanitarian support in the region will be followed by extensive support from the international community.

• The Ministry of Foreign Affairs of Ethiopiacelebrated today (March 8) International Women’s Day under the theme, “Women in leadership: Achieving an equal future in a COVID 19 world”.On the occasion, State Minister H.E Ambassador Birtukan Ayano, said the day symbolizes the sacrifice paid by women, the successes achieved, and barriers that need to be removed for more equality. There used to be very few women in diplomacy said the State Minister, but now we are witnessing advances through all of the reforms the Ministry has gone through so far. She urged women in the diplomatic field to work towards achieving the economic and security interests of the country, promoting its positive images, and working for regional peace with the utmost discipline.

II. #GERD
• Members of the Presidential Panel formed by the President of the DRC on the tripartite negotiations on the Grand Ethiopian Renaissance Dam had visited Ethiopia from March 03 to 07, 2021. During the meeting, the delegation held talks with the President of the Federal Democratic Republic of Ethiopia, the Deputy Prime Minister and Minister of Foreign Affairs, the Minister of Water, Irrigation and Energy, and representatives of negotiating countries.
• Before the Congolese group visited Ethiopia, it made similar visits to South Africa, Egypt, and Sudan, where they have gathered information on the views of the countries on the tripartite talks. Egypt and Sudan said they recognize Ethiopia’s right to development, but they have their own concerns. In this regard,
– Sudan is concerned about dam safety, information exchange, and Ethiopia’s unilateral action.
– Egypt wants the negotiations to focus on legal issues and reach a binding agreement under international law.
– Egypt and Sudan have stated that they will never accept the completion of the second year of the dam without an agreement.
– The AU, UN, USA, and EU should play as mediators
• The Ethiopian sides made it clear that:
– The Nile basin is a shared water resource where all downstream and upstream countries will benefit from negotiations
– Ethiopia has the natural and legal right to utilize its water resources fairly and equitably without causing significant harm to downstream countries
– The questions of dam safety and information exchange that are raised by the Sudanese side have been adequately addressed and they could not be reasons for complaint at all
– The tendency to stick to the status quo of the colonial era agreements under the name of reaching binding agreements is not acceptable
– The GERD issue can be solved under the auspices of the ongoing African Union-led negotiation which does not necessitate the involvement of a different party over the issue as a mediator.
– Ethiopia strongly believes that African problems can be solved through African Solutions and the African Union and the DRC are perfectly capable of coming up with win-win solutions to all.
• The Ethiopian Diplomatic Group on the Grand Ethiopian Renaissance Dam has held its regular discussion last week in person and online. The group exchanged information on current issues related to the Grand Ethiopian Renaissance Dam.

III. #Economic Diplomacy
• Ethiopian Embassy in Brussels and Ethiopian Airlines’ Benelux Area Office co-organized a virtual event last week titled “Ethiopian’s Tourism Potentials: Promoting Ethiopia as a Preferred Destination for Tourists”. The event was aimed to promote Ethiopian tourism to the tour operators based in Belgium and Luxembourg, connect Ethiopian tour operators with Belgian and Luxembourger counterparts, and create a platform for discussions on the prospects and challenges of the sector.
• The consulate general of Ethiopia in Chongqing, China participated in an online meeting with a joint meeting of Chagan, a Chinese car manufacturer, and Ethio-Engineering Group, where the two agreed to work together to assemble cars in Ethiopia.

IV. #Citizen-centered Diplomacy
• The government of Ethiopia has expressed condolences over the death of many prisoners in a migrant detention center in Yemen due to fire. Our embassy in Oman is following the matter closely. The government of Ethiopia would like to reiterate that people should avoid illegal traveling and hoodwinked by human traffickers.
• We have repatriated 54 citizens from Beirut, 676 from Riyadh, and 341 from Jeddah over the week. 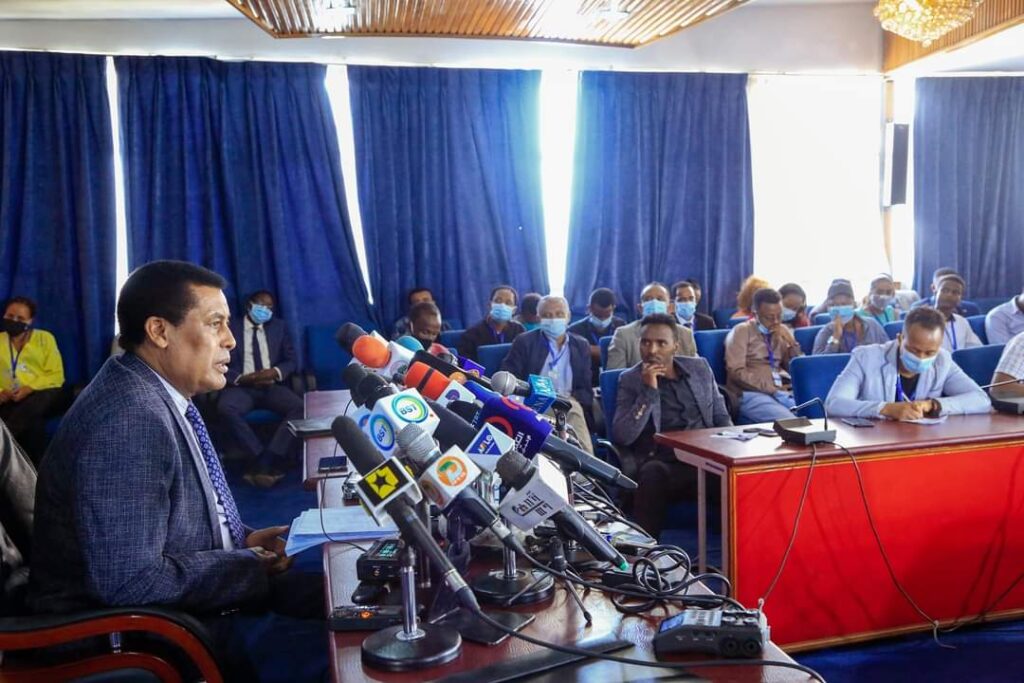 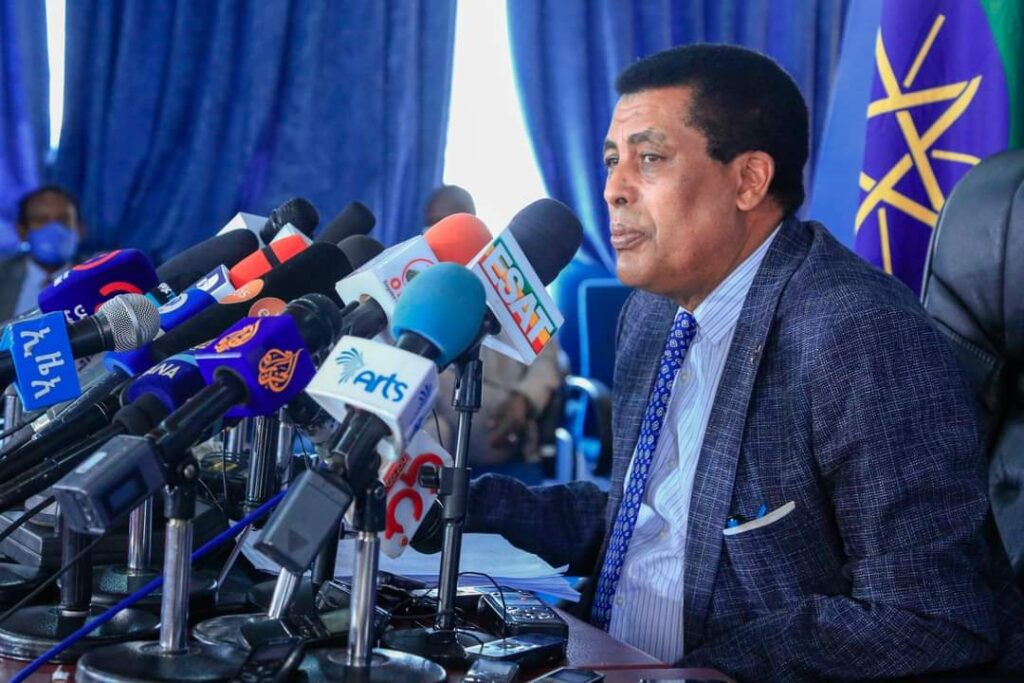