The Spokesperson of The Ministry of Foreign Affairs of Ethiopia, H.E. Ambassador Dina Mufti, has presented the Ministry’s biweekly press briefing today (March 03, 2021) focusing on political diplomacy, the Humanitarian situation in Tigray, issues related to the GERD, and major activities related to Economic and citizen-centered Diplomacy. Please find here is the Summary of the Press Briefing.

• The ambassadors appointed recently by H.E. President Sahle-work Zewde took an oath before the President on Thursday (February 25). President Sahle-Work Zewde and H.E. Demeke Mekonnen, Deputy Prime Minister and Foreign Minister of Ethiopia have expressed their hope that the ambassadors would do their level best in carrying out their responsibilities and creating stronger ties between Ethiopia and the countries that they are assigned to. They are assigned to Australia, Italy, Turkey, Senegal, Ghana, DRC, Saudi Arabia, African Union and South Sudan.

• H.E. Mr. Demeke Mekonnen, Deputy Prime Minister and Foreign Minister of the Federal Democratic Republic of Ethiopia had addressed last week on Wednesday the 46th session of the United Nations Human Rights Council today via a pre-recorded video message. Mr. Demeke’s speech highlighted why the law enforcement operation in Tigray was an absolute necessity given the belligerent attitude of the TPLF clique that threatened to hijack the reforms registered under the new political administration in the country. He also emphasized that the focus of the government is now on the rehabilitation and humanitarian assistance works underway in the region. He reaffirmed the Government of Ethiopia’s commitment to take all allegations of human rights violations seriously and give proper attention to the findings of Independent institutions, such as the Ethiopian Human Rights Commission in this regard.

• Deputy Prime Minister and Minister for the Foreign Affairs of Ethiopia H.E. Demeke Mekonnen had a phone conversation with the Foreign Minister of Norway Her.E. Ine Eriksen Søreide. The two sides talked about the status of the GERD negotiations and the Humanitarian support in Tigray. Mr. Demeke said although more than 3 million people have been reached for the relief support so far, the government is taking the lion’s share in covering 70% of the delivery of food and non-food items, and support from the international community is much welcomed, including the government of Norway. Regarding some of the concerns over the violation of human rights in the region, Mr. Demeke said the government of Ethiopia is ready to address the issues where it showed its commitment by deploying experts from the Attorney General office and the Federal Police Force to investigate the matter.

• H.E. Demeke Mekonnen Deputy Prime Minister and Foreign Minister of Ethiopia had participated at a panel on the 125th victory of #Adwa organized by Ethiopian Embassy in Uganda. In delivering a speech, he highlighted the importance of unity among people to solve problems as daunting as the Adwa battle.

N.B. Ethiopian Embassies all over the World have been organising panel discussions over the Adwa battle and its impact on Pan-Africanism movements. The victory has been celebrated in our missions understanding the unifying factor and important lessons of the victory.

• State Minister, H.E. Ambassador Redwan Hussein received a copy of the credential of the newly appointed US ambassador to Ethiopia, H.E. Ambassador Geeta Pasi on Monday (March 01) at his office. During their conversation, Ambassador Redwan underlined that despite the unfettered access to the Tigray region that the international community gets recently, the humanitarian support that the government is not getting encouraging supports. He said criticisms alone would not meet the demands for humanitarian support in the region. Ambassador Geeta Pasi, on her part, thanked the State Minister for the briefing and affirmed that she would do her level best to scale up the relationship between the two countries. In their discussion about the situation of the tripartite talks over the GERD, Mr. Demeke reiterated how Ethiopia has been faithfully negotiating with Sudan and Egypt so far and expressed hope that with the Congolese leadership the way forward will be sorted out.

II. The Situation in #Tigray

• Unfettered access has been given to Humanitarian organizations
• However, the government is still continuing to cover 70% of aid demands despite the unfounded criticism and insignificant support from international bodies.
• The government of Ethiopia strongly believes that criticism alone without support helps neither the affected people nor the government in any way.
• As the World Food Program Head, Mr. David Beasley said meeting the humanitarian demands in the region requires 107 million dollars in funds
• The Government needs assistance and calls on the international community to respond to Mr. David Beasley’s call in this regard
• A total of 135 international organizations and staff who have applied to assist in the humanitarian aid in Tigray have been granted access to Tigray region.
• Of the 135 international organizations, 11 are international media outlets
• So far, the government has identified 2.5 million people, including 1.8 million who were previously supported by the Safety Net program, in need of support under the coordination of the Emergency Coordination Committee (ECC) of Ministries.
• Support has been provided to 3.5 million people in need of assistance.

• The Federal Police Force, the Attorney General, Ethiopian Human Rights commission together in collaboration with the Interim administration of Tigray will carry out independent investigations on alleged crimes committed in the region
• Based on the results of the Investigation and the recommendations of the independent investigative teams, the government will make sure that perpetrators are brought to justice
• If the investigation process needs assistance along the way, the Government may consider to invite external bodies to investigate the matter
• As we have already said in a statement on Amnesty’s report, the Ethiopian Human Rights Commission,in its earlier reports including preliminary findings on Axum, confirm looting, and sexual violence as well as damages to civilian infrastructures in various parts of the region. The outcome of the investigations by the competent Ethiopian authorities and the Ethiopian Human Rights Commission will be publicized to the Ethiopian people and the international community in due course.

III. On the #GERD

• The construction of the dam is progressing well and public involvement in advocacy, financial and professional support is highly encouraged
• Ethiopia believes the AU-led negotiation over the GERD will bring win-win solution to all
• The tendency to invite various parties as mediators to the issue while the AU-led negotiation has not been finalized is demeaning the efforts of the AU and the portrayals of some parties as if Ethiopia has postponed the on-going negotiation is also unfounded
• We have been negotiating in good faith and in deep belief that we have got the right to utilize our water resources without significantly harm the downstream countries, in accordance with international law principles of fair and equitable utilization of the water resources
• We thank South Africa for trying to bridge the gap between the Tripartite and we hope the Congolese will do the same

IV. #Economic and #CitizenCentred Diplomacy
• Ethiopian missions in Jakarta, TelAviv, Nairobi, Dubai and Rabat participated in discussions, trade fairs and exhibition of Ethiopian products so as to promote business and investment in Ethiopia.
• 1053 Ethiopians were repatriated from Jeddah (600), Riyadh (338) and Muscat (115) over the week. 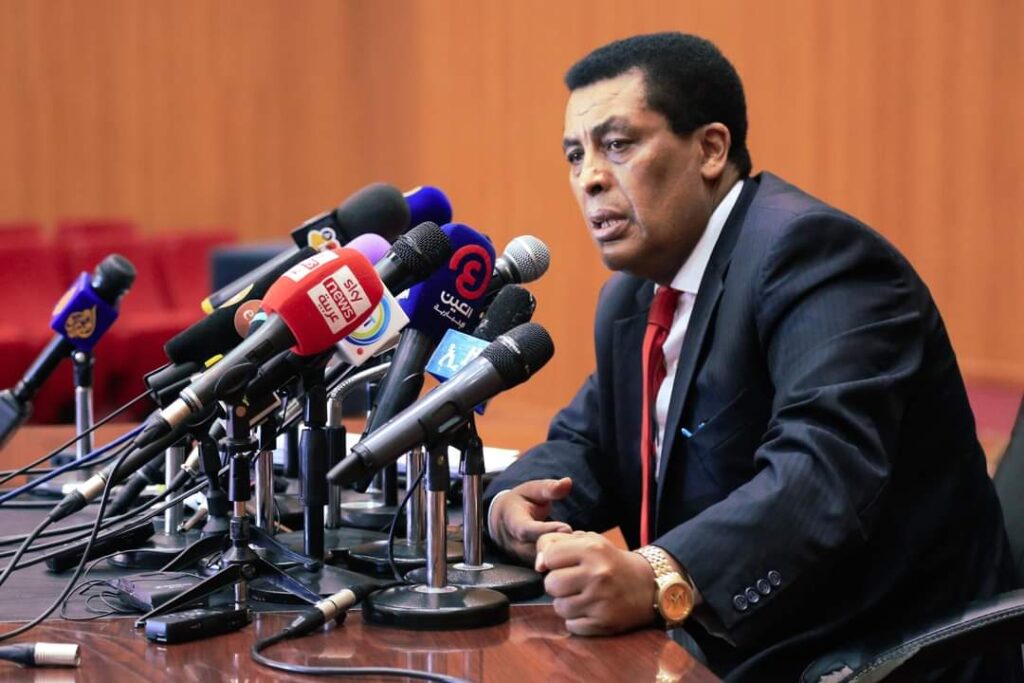 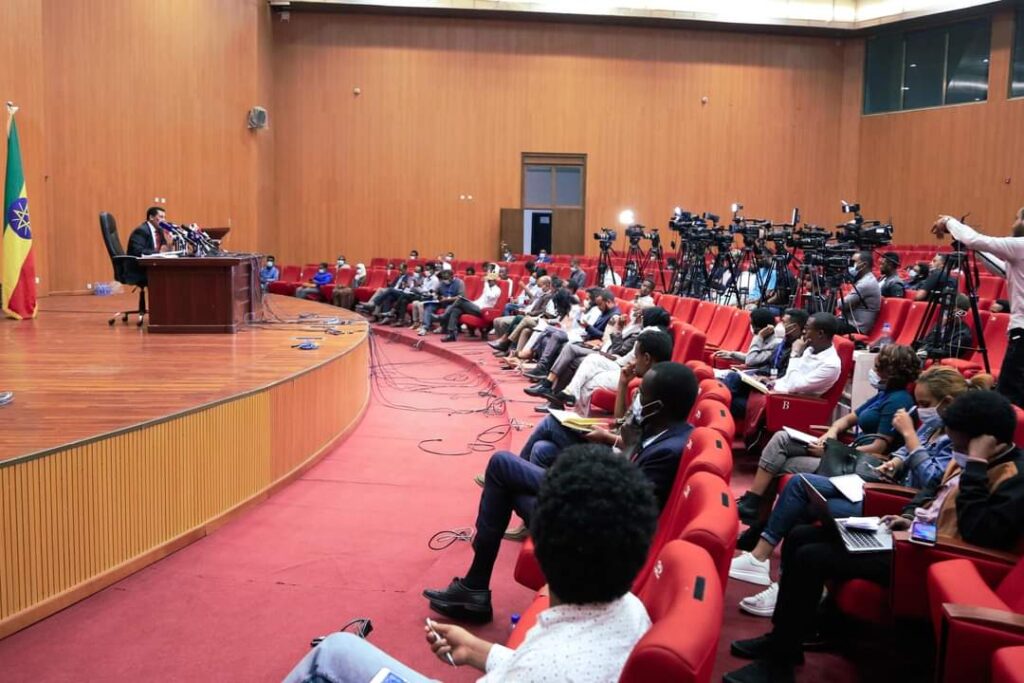