Skip to content
The agreement signed today in South Africa is monumental in moving Ethiopia forward on the path of the reforms we embarked upon four and half years ago. Our commitment to peace remains steadfast. And our commitment to collaborating for the implementation of the agreement is equally strong.

On behalf of the people and Government of Ethiopia, I would like to express my gratitude to the African Union Commission and the AU High Representative for the Horn of Africa His Excellency former President Olusegun Obasanjo, together with esteemed members of the high representative’s team; His Excellency former President Uhuru Kenyatta and Her Excellency Dr. Phumuzile Mlalmbo, former Deputy President of the Republic of South Africa. I would also like to thank His Excellency Mr. Moussa Faki Mahamat, Chairperson of the African Union Commission for spearheading the AU’s principled position of ‘African Solutions to African Problems’.

To my dear brother His Excellency Cyril Ramaphosa, President of the Republic of South Africa, Ethiopia is grateful to you and the sisterly nation of South Africa for hosting these talks to their successful conclusion.
I would like to express appreciation to friends of Ethiopia that have taken an active role in supporting the conclusion of this agreement. We count on your continued support in reconstructing conflict affected areas in the Northern part of the country and an enhanced partnership with Ethiopia in our countrywide development endeavors.
Last but not least, to the brave members of the Ethiopian National Defense Forces and the courageous people of this nation that stood a testing period, I humbly share deepest gratitude.
May God Bless Ethiopia and her Children!
November 2, 2022 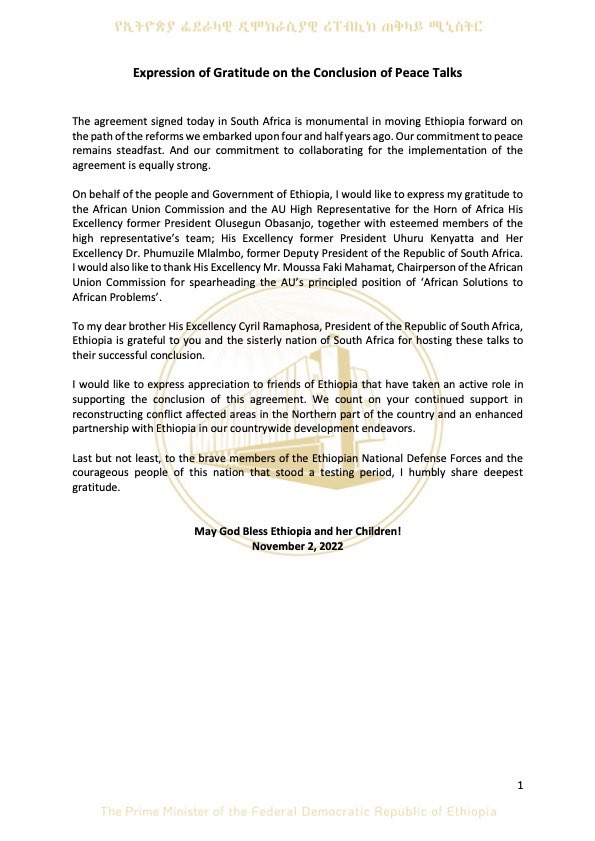