#Spokesperson of The Ministry of Foreign Affairs of Ethiopia, H.E. Ambassador Dina Mufti, gave the Ministry’s biweekly press briefing on December 29, 2020 to the media. In his presentation, the Ambassador focused on the latest developments regarding the law enforcement operation in #Tigray, the recent situation over the #Ethiopian-#Sudanese border, and Economic and Citizen-centered diplomatic activities as well as efforts to employ #Publicdiplomacy to create awareness on current situations in Ethiopia and other key national issues. Here is the summary of the ambassador’s briefing:

• Service givers (telecommunication, electricity, banking and aviation) are reporting that they are resuming services gradually

• Ministry of Trade and Industry is consulting with manufacturing industries in Tigray on restoring operation and services in the region.

• Government has continued to rebuilding infrastructure

2. Dominant and misguided narratives regarding the operation in Tigray are slowly changing

• the public and , particularly, the media are slowly but surely understanding that the TPLF clique has disrupted electric and communication lines, demolished bridges, roads and airline runways (such as Aksum Airport) in addition to the fact that it has been fabricating lies that used to dominate the media

1. The Ethiopian team thanked the Sudanese for positive deeds
=========================
• for being delisted from the state sponsors of terrorism
• for the unwavering support and understanding for our law and order enforcement operation in the Tigray Region
• for letting our citizens crossing their boarder and cordially hosting them
• affirmed to redouble our efforts to translate the strong bilateral relation into more strategic cooperation (Minister for Transport has visited Sudan to discuss with her Sudanese counterpart the cooperation projects on port utilization and railway development)

2. Ethiopia’s understanding of the reality on the border issue
===============
• what has happened in our common boarder recently did not commensurate with the longstanding principle of solidarity and fraternity that existed between the two countries
• Starting from November 9, 2020, we are observing organized attacks by the Sudanese Military Forces using heavy machine guns and armoured convoy
• Agricultural products of Ethiopian farmers are looted, their camps are vandalized, and they are also hampered from harvesting their own farms. A number of civilians have been murdered and wounded
• it is endangering the agreements we have reached to maintain the status quo in the area north of Mount Dagelish

3. Ethiopia’s stance on the issue
=============
• it is our firm position that reactivating the existing mechanisms and finding an amicable solution on settlement and cultivation are the only way to bring lasting solution to the issues in our common border.
• We believe that securitization and unnecessary escalation will only worsen the situation and create pointless tension in the border area and disrupt daily activities of our peoples living in the border area.

4. The Sudanese stance
==========
• Insisted to determine a date for the start of the border demarcation process (They said when the borders are demarcated, we can discuss anything, including the issue of Ethiopian farmers on the Sudanese territory)

5. Result of the meeting
=======
• The two sides issued a joint communiqué agreeing to submit reports to the leadership of the two countries
• Ethiopia believes that the issue can be solved through dialogue

6. Messages from H.E. Prime Minister Abiy Ahmed
================
• Ethiopia has always been keen on the stability of its neighborhoods to the same extent that it is keen on the stability and security of its people
• When the revolution erupted in Sudan to achieve the demand of the people for freedom and justice, the Government and people of Ethiopia stood by its brothers in Sudan
• he said some parties seek to create tensions between Sudan and Ethiopia
• he said the historical relations between Ethiopia and Sudan are too deep to be shaken by the desire of conspirators

• State Minister of Foreign Affairs, H.E. Tsion Teklu has participated in an online investment forum prepared to commemorate the 30th year of the commencement of diplomatic relations between #Ethiopia and #Israel. The Forum discusses investment opportunities in Ethiopia.

• Investors from #India, #Turkey, the #UAE, and #China have shown interest to invest in Ethiopia and some of the representatives of the companies in these countries have paid a visit to the country. The companies are interested to invest in agriculture, construction, textile, edible oil production and mining.

• Ethiopia has repatriated 328 citizens from Lebanon and Saudi Arabia

Ministry of Foreign Affairs conferred with the representatives of the Ethiopian Public Diplomacy Team (Cluster leaders) on the need to create awareness on current developments in Ethiopia and other key national agendas to people in Ethiopia and the international community. 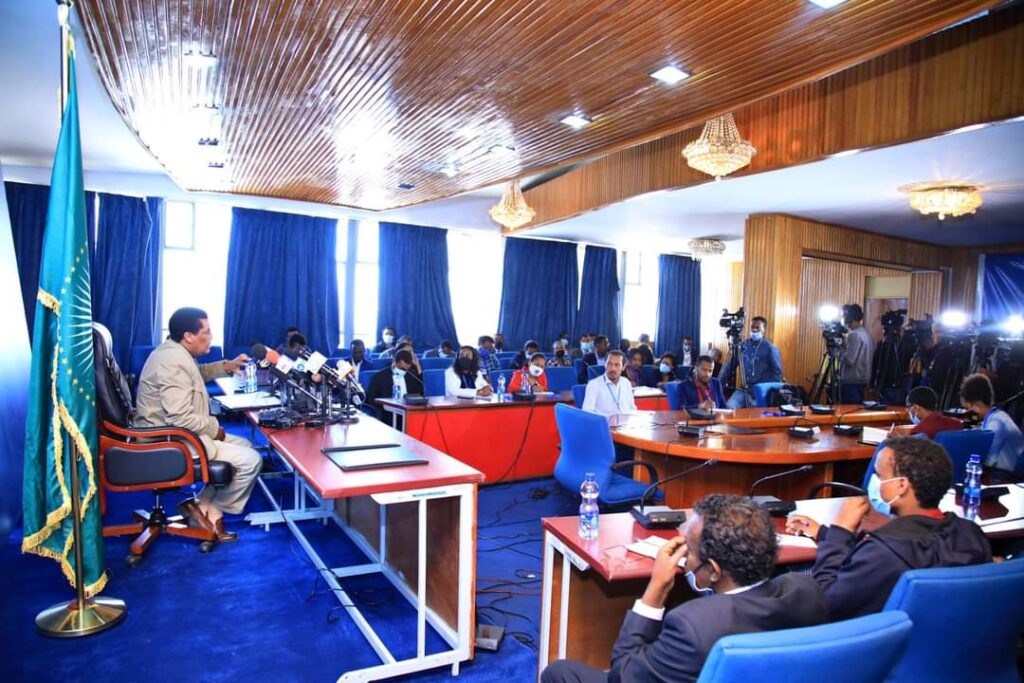