Press Briefing Summary 01 July 2021
The spokesperson of Foreign Affairs of Ethiopia, H.E. Ambassador Dina Mufti, gave the Ministry’s biweekly press briefing July 01, 2021, to the media. In his presentation, the Ambassador focused on political diplomacy, the humanitarian ceasefire in Tigray, Economic and citizen-centered diplomatic activities over the week.

I. #PoliticalDiplomacy
==============
Deputy Prime Minister and Minister of Foreign Affairs of Ethiopia, H.E. Demeke Mekonnen met on Monday (June 28) with Graham Maitland, UN Director for Eastern African Division of the Department of Political and Peace Building Affairs and Operations. The two sides, among others, have discussed Sudan’s request to the UN to remove the Ethiopian peacekeepers from the disputed Abyei region. In this regard, Mr. Demeke said Ethiopia’s force members are paying sacrifices to prevent war, and their exit, if necessary, has to be with the consent of stakeholders and in a dignified manner. The Deputy Prime Minister also questioned the morality of some UN agencies in politicizing and unnecessarily echoing the cases of some Ethiopian soldiers who dramatize their defect from their unit just to get acceptance to their asylum quests.
Deputy Prime Minister and Minister of Foreign Affairs, H.E. Demeke Mekonnen bade farewell on Monday (June 28) the outgoing Ambassador of the Hashemite kingdom of Jordan to Ethiopia, H.E. Wafi Ayyad. Mr. Demeke said the relationship between the two countries is long and historic, adding that the two countries need to further strengthen bilateral cooperation in various fields. In connection with their discussion on GERD, the Deputy Prime Minister expressed his dissatisfaction with the Arab League’s unfair stance on the Grand Ethiopian Renaissance Dam. He also said that Jordan was expected to play a positive role as a friendly country in this regard.

The Intergovernmental Authority on Development (IGAD) Council of Ministers has held its 72nd extraordinary meeting virtually on Thursday (June 24) chaired by the Chairperson of the Council of Ministers and Minister of Foreign Affairs of Sudan, H.E. Mariam al-Sadiq al-Mahdi. Ambassador Birtukan Ayano representing Ethiopia, said the 6th national election in Ethiopia ended peacefully with the participation of nearly 40 million voters and thanked member countries and institutions for their support in this regard. The meeting ended in a constructive manner where all the speakers praised the electoral process in Ethiopia, Djibouti, and Uganda, and gave due attention to outstanding issues of member states that were held as agenda items.

In a letter sent to the president of the United Nations Security Council (UNSC) on Wednesday (June 23), Ethiopia rejected the latest attempts made by Egypt and Sudan to seeking the involvement of the Security Council over the GERD issue outside of its mandate. Ethiopia said in the letter that Egypt and Sudan’s recent actions are simply a continuation of a well-orchestrated scheme to undermine the AU-led process and eventually declare it ineffective adding that this only erodes trust between the three countries. The letter concluded its explanation of Ethiopia’s stand over the tripartite negotiations by calling on the Security Council to encourage Egypt and Sudan to continue negotiating in good faith under the auspices of the African Union.

A. Following the declaration of the unilateral ceasefire by the government of Ethiopia in the Tigray region, Prime Minister Abiy Ahmed spoke with the media; Deputy Prime Minister Demeke Mekonnen addressed Ethiopian mission leaders via zoom while State Minister Ambassador Redwan Hussien and General Bacha Debele jointly briefed the media regarding the unilateral ceasefire that the government declared in Tigray. The main points on the necessity of humanitarian ceasefire are:

• Law enforcement objectives- the ceasefire considered the objectives of the law enforcement operation, survival of the nation, concerns of the people of Tigray, and the international community.
• Threat to the State- During the operation the government aimed to neutralize TPLF militarily, recapture or destroy looted ammunition, set Ethiopian troops free from TPLF, and hold criminals accountable for their impunity. In this regard, the government met the objectives, and despite its propaganda, TPLF is no longer an existential threat to the well-being of the nation.
• Ethnically motivated propaganda and attack on soldiers- Although TPLF’s capacity to launch conventional war was neutralized within three weeks and many insurgents were decimated through time, the government declared the ceasefire because the Ethiopian army was not ready to exchange fires with people in Tigray who have been misled by the ethnically charged propaganda of the TPLF.
• Time for inward looking moment: the ceasefire would help the people of Tigray to reflect on the pros and cons of colluding with a terrorist group to fight the Ethiopian troops who were providing protection and humanitarian aid in the region.
• Agricultural reasons- the people of Tigray should get undisturbed time for agricultural activities during the rainy seasons. Although TPLF is irresponsible, the government should not be tempted to go through the stubborn stance of TPLF to continue fighting despite the food insecurity in the region.
• Neutralising third parties: the government has observed that there were too many attempts to interfere in the internal affairs of Ethiopia and weaken the state under the disguise of what they call solving the “crisis” in Ethiopia
• International community: The unilateral ceasefire is also an attempt to address the major concerns of the international community for cessation of hostility, unimpeded access to the region, and the withdrawal of Eritrean troops, he said. In line with this the international community now is expected to scale up much-needed humanitarian support to the people of Tigray and give due attention to the recent TPLF bravado belittling the ceasefire and threatening to launch attacks against the Amhara region and Eritrea.
• Mekelle forceful capture or evacuation? the Ethiopian army was evacuated from Mekelle because Mekelle has ceased to be the center of gravity that is capable of posing a threat to the nation and the federal government. The Ethiopian army was not dislodged by the TPLF from Mekelle. The group was defeated in a 3-weeks swift conventional war while it was armed to teeth but now its military, administrative and organizational structure is obliterated and could not make the Ethiopian forces leave the city by force.
• External threat the army has to refocus its attention to protecting the country from another national threat, this time an external one, rather than fighting the already incapacitated TPLF.

General Bacha further said the army is ready to respond accordingly if unduly provoked by attacks that compromise the spirits of the ceasefire.

B. Reactions from the International Community

African Union, China, UAE, United Nations, United States, Sweden have welcomed the ceasefire although some were cautious in this regard. Their major point is that all conflicting parties should strive for peace and be willing for further dialogue.

III. Economic Diplomacy
Finance Ministers of Djibouti, Ethiopia, Kenya, Somalia and Sudan under the Horn of Africa Initiative (HoAI) met on Saturday (June 26) in Djibouti to evaluate progress witnessed so far in areas such as trade and energy and to discuss the way forward.

• The repatriation of a large number of undocumented Ethiopian migrants who have been detained for more than a year inside Saudi Arabia refugee camps has begun on Saturday (June 26) with up to 8 flights per day. The plan is to evacuate 40,000 Ethiopians from Saudi Arabia within 2 weeks. We have repatriated 9,902 Ethiopians from Saudi Arabia since last Saturday with 35 flights.
• We have also repatriated 33 Ethiopians form Hargeisa and 73 from Puntland.
• Ethiopia contributes a replica of Lucy to be displayed at UNESCO headquarters on Friday (June 25). H.E. Dr. Hirut Kassaw, Minister of Culture and Tourism delivered recorded remarks for the ceremony.The event was addressed by H.E. Director-General Audrey Azoulay, H.E Ambassador Henok Teferra, some of the co-discoverer Professors Donald Johansen and Ives Coppens, Ambassadors accredited at UNESCO and invited guests. The display highlights the fact that Ethiopia is the land of origins and a symbol of our common humanity.
• Alliance for GERD in Canada, Manitoba chapter in collaboration with the Ethiopian Embassy in Canada have managed to collect 44,575 Canadian dollars while Ethiopians in Frankfurt, Germany, under the auspices of the Consulate have bought 16, 000 worth of GERD bond while Bedir Ethiopia Ethiopian Muslims Organization in the US in collaboration with the embassy in Washington has collected 50,000 US dollar via zoom meeting. 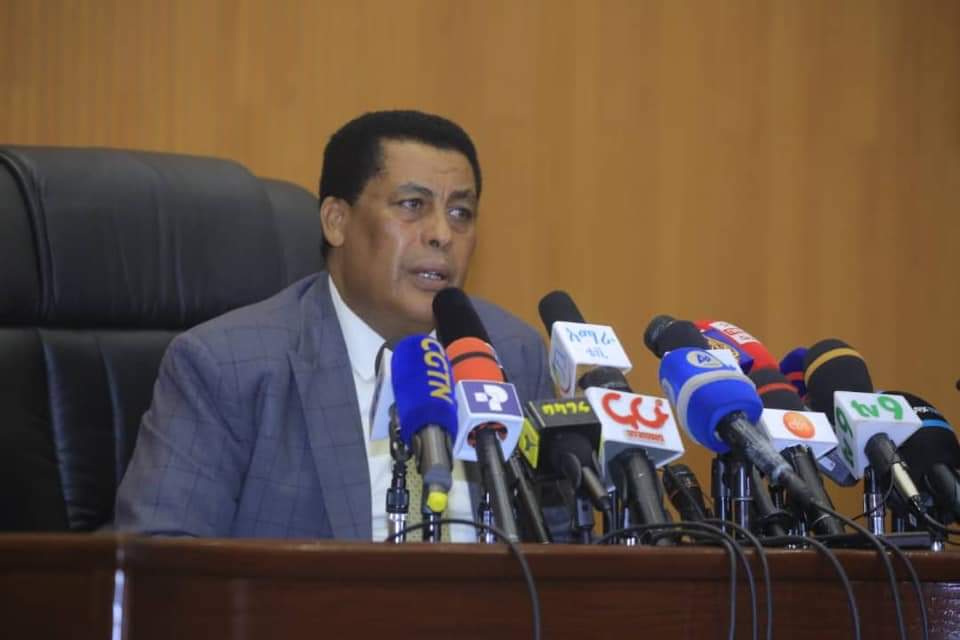