Ethiopia is home to the largest population of cattle in Africa and the 10th largest in the world. The number of livestock doubled between 1995 and 2010 from 58 million to more than 100 million. Today, it comprises approximately 54 million cattle, 25.5 million sheep, 24 million goats, seven million donkeys, two million horses and one million camels. The livestock sector contributes for about 16.5% of the GDP, and is an important factor of livelihood and revenue for the rural populations. In fact, between 11 and 13 million households are engaged in livestock keeping, which also include beekeeping (Ethiopia is the leading honey producer in Africa). 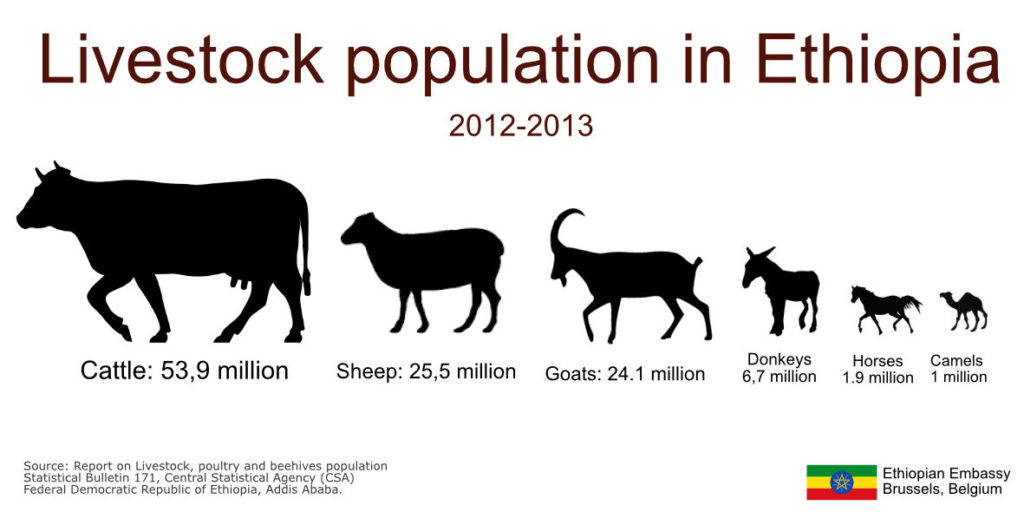 To address challenges such as availability of feed and commercial channels and to further improve the productivity and quality of the livestock sector, a national Livestock Master Plan is prepared by the Ministry of Agriculture and implemented by the Agricultural Transformation Agency (ATA).

Being the first livestock producer in Africa, Ethiopia has a huge potential for the leather industry. While leather exports stood at USD 123 million in 2012, the government wants to grow the leather industry’s annual exports to USD 500 million by the end of 2015.

Every year, the country produces about 2.7 million hides, 8.1 sheepskins and 7.5 million goat skins. Moreover, with a population of 26 million, Ethiopia has the largest flock of hair sheep in the world. Hair sheep skin has a particularly fin and tight grain, making it highly valuable for female gloves of higher quality and luxury items.

Ethiopia’s leather and leather product sector already produce a range of products from semi-processed leather in various forms to processed leathers including shoe uppers, leather garments, stitched upholstery, backpacks, purses, industrial gloves and finished leather. The government plans to fully utilise these resources through value addition and thereby create more jobs and boost exports. Ethiopian leather products are exported to markets in Europe (especially Italy and the UK), America, Canada, China, Japan and other Far Eastern countries and the Middle East. All exports are tested by the Quality and Standards Authority of Ethiopia (QSAE).

A good Opportunity for investors

There is a conducive and enabling atmosphere in Ethiopia in terms of both the political and economic situations. As one of the government’s priority sectors, investors in leather enjoy incentives including duty exemptions on capital goods and construction materials, and five-plus years of an income tax holiday. Other positives aspects of operating in Ethiopia are free access to US and EU markets as well as cheap electricity. Moreover, with a wage of about USD 40, the cost of labour in Ethiopia is about ten times less than in countries such as China.

Official statistics from the Ethiopian Revenue and Customs Authority show that of the total leather products export, still about 73 percent is earned from finished leather, which has the potential to be converted into other value added products such as shoes, bags, gloves or garment. In recent years however, the country’s leather industry has attracted several foreign companies that have set up factories to create value added products. For instance, the Chinese footwear manufacturer Huajian Group opened a factory in 2012 at the industrial zone outside Addis Ababa where it manufactures 6,000 pairs of shoes and boots per day. The company moreover secured 138 hectares of land to establish its own industrial zone at a cost of about USD 2.2 billion. Other companies such as the UK firm Pittards have also installed factories to produce high quality leather items for export.

In this way, the local industry has already created jobs for millions of Ethiopians and increased export earnings of leather products including gloves and garments. In 2013 for example, earnings stood at $132 million from $76 million in 2008. Out of this figure, around $30 million came from shoe exports. While Ethiopia has long exported its leather to Europe and Asia where it was transformed into fashionable items, recent investments in Ethiopia-based factories by foreign companies are helping change this, and create jobs for millions of Ethiopians. This, in return, is expected to boost the local consumption of Ethiopian leather products, which will be even more profitable to the industry.

Report produced by the Embassy of Ethiopia in Brussels